The molded plywood chair that became an American icon. 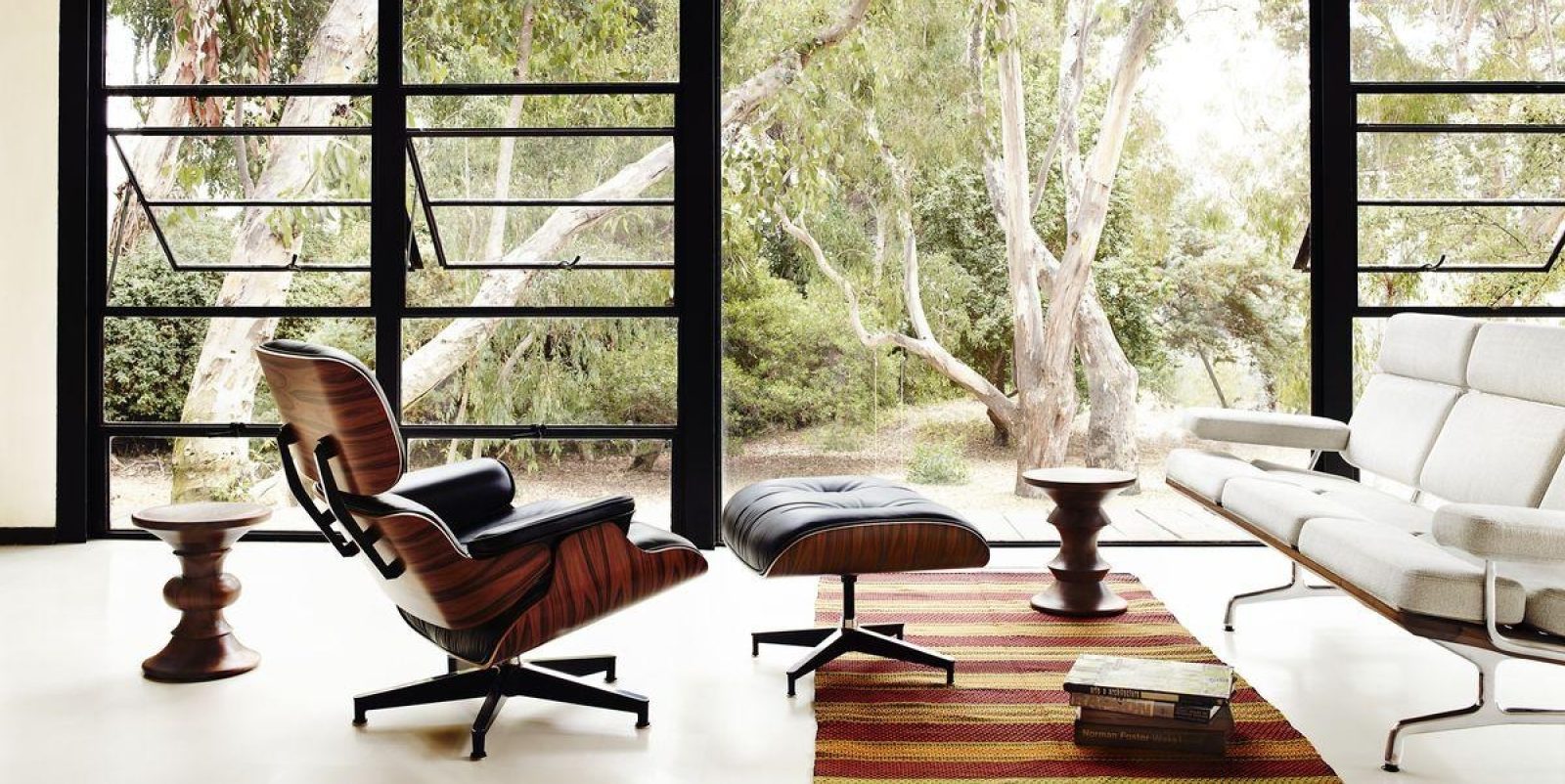 Ray and Charles Eames are arguably two of the greatest innovators of the American industrial and furniture design industry to this day. The beloved husband-and-wife duo were the guiding forces behind the Iconic Eames Lounge Chair, one of many of their many pieces.

The Eames' contributions to American culture in the early 20th-century extend beyond the furniture showroom floor, surpassing boundaries that influence the ways in which we work and live today. The couple is responsible for producing an enormous amount of furniture designs, toys, a staggering number of exhibitions, lectures, and dozens of films, but they are most well known for the famous sculptural chairs that bear their name.

The Cranbook Academy of Art, circa 1940s

1940 was a pivotal time, not only for American design but for the country as a whole; the nation was just coming out of the Great Depression and was only a few years away from entering World War II. Charles Eames was an architectural teacher at the Cranbrook Academy of Art near Detroit at the time when he met fellow architectural teacher, Eero Saarinen, and student, Ray Kaiser (Eames). In 1940, the Cranbrook Academy of Art held an "Organic Design in Home Furnishings" competition, inspiring design team Eames and Saarinen to embark on a bold new idea.

Drawing inspiration from the Industrial Age boon of mass production, the dynamic duo sought out to create a chair from a single piece of plywood that could be mass-produced for the modern home. Although the chair wasn't viable, they got first place in the contest. At the time, there simply wasn't a process that allowed for bending plywood into the shape needed for the chair to work. After a few more tries, Saarinen gave up on the idea, allowing Charles and Ray to create a process that would ultimately lead to the Eames lounge chair in years to come.

Charles and Ray Eames already had significant experience working with plywood - they molded parts for use by the U.S. Navy during WWII using heat and pressure-application techniques. After the war, they continued experimenting with the material, and the first generation of the Eames molded and bent birch plywood side chairs began rolling off the production lines in 1946. Although it wasn't crafted from a single piece of plywood as originally intended, the design nevertheless evoked the feeling of a chair perfectly molded from a single piece of wood. That same year, Ray and Charles formed a partnership with furniture maker Herman Miller and over time, applied their molded plywood technique to a variety of other products including folding screens and other household accessories. After a decade of pioneering and innovation, including the molded plastic and wire mesh chairs, the Eames' returned to their roots, unveiling what would long be considered their masterwork - the legendary Eames Lounge Chair.

Soft as a Baseball Glove

The story behind its creation is almost as famous as the chair itself. It's said that the inspiration came to Ray and Charles Eames as a result of watching their friend, Hollywood director, Billy Wilder, try to relax on film sets in various lounge chairs during the chaos of filming. Between takes, the famed director would put makeshift lounge chairs together so he could comfortably nap. Citing the English club chair as inspiration, the designers set out to create a better and more modern version of that chair, one that had the aesthetic of “the warm receptive look of a well-used first baseman's mitt.” The result was a smooth and luxurious reclining chair designed with a molded plywood shell, headrest, and ottoman, all upholstered with tufted, buttery soft leather.

Hollywood Director Billy Wilder trying to get comfortable, circa 1950s

The Eames Lounge Chair made its national debut in 1956 on NBC's television show "Home," which was hosted by Arlene Francis. Francis called it "quite a departure" from their earlier designs. The show catapulted their already famous name beyond the furniture and design industries, into a common household name, even to this day. Stardom ensued for both design and designers and yet, as popular as the lounge chair and ottoman have become, they remain grounded in the fine craftsmanship that continues to distinguish this classic, authentic design.

The smooth curves of molded plywood on the Eames Lounge and Ottoman were unprecedented in furniture design at the time. The Eames Lounge and Ottoman came about during a period of very spare and minimal furniture, but Charles was insistent on building a chair that would provide respite from the "strains of modern living." Just as Charles and Ray’s home provided “a special refuge from the strains of modern living” for a famously eclectic group of friends and associates, so too the lounge set provides a welcoming comfort to the body.

One of the first ads for the Eames Lounge Chair and Ottoman, in 1956

In spite of its humble origins, the Eames Lounge and Ottoman are permanent pieces in the New York Museum of Modern Art as well as the Art Institute of Chicago. The iconic set not only lives in museums but continues to offer comfort and style to home and office interiors everywhere. The Eames Lounge and Ottoman has also been the subject of several books, television shows, movies, and documentary films.

Today, Herman Miller remains the sole manufacturer with the rights to produce and sell Eames' products in the United States. The Eames Lounge and Ottoman is available in classic or tall sizes, and offers a variety of veneers and upholstery options—including a choice of leathers, Mohair, and Flamiber Boucle. Whichever way you choose to configure it, you can rest assured in knowing the quality and authenticity of this design.

Want to see the Eames Lounge in Person?

Make an appointment with our Downtown San Diego, Irvine, or Riverside locations to try the Eames Lounge out for yourself!